FOX
In Living Color is a American variety sketch-comedy television series created, starred, written, and executive produced by Keenen Ivory Wayans, the program ran on the FOX Network from 1990 to 1994. The show was produced by Ivory Way Productions, in association with 20th Century Fox Productions. The series was a huge success as it won an Primetime Emmy Award for "Outstanding Variety, Music or Comedy Series" in 1990 and gained international prominence after airing a special live episode as a counterprogram for Super Bowl XXVL, earning the show very high ratings.

After the success of "Hollywood Shuffle" and "I'm Gonna Git You Sucka", FOX approached Keenen about having his own show. Wayans wanted to create a show similar to Saturday Night Live, but with a cast with people of color that took chances with it's content. The show also helped launch the careers of male comedians/actors such as Jim Carrey, Jamie Foxx, and David Alan Grier.

Keenen stopped appearing in skits after the end of the third season over disputes with the FOX Network about the show censoring the show's content and rerunning episodes without consultation. During the fourth season, he appeared during (1992-93) and then remained as a executive producer and remained in the opening credits until the tenth episode. Marlon left shortly after Keenen resigned as producer. Shawn and Kim left at the end of the fourth season. Damon left at the end of the third season to pursue a movie career, but made a few guest appearances.

A attempt reboot for the show went into production in 2011 with new cast members and new line-up of Fly Girls with Keenen returning as host and executive producer. Pilot episodes for the reboot were shot and were set to air on the FOX network but it was later announced in 2013 that the reboot was officially cancelled as he revealed that he felt the reboot wouldn't be sustainable after it's first season. 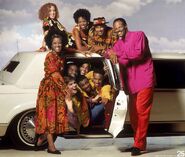